Florida A&M University (FAMU) administrators, students, faculty and staff attracted more than 2,000 students to recruiting events in Tampa, Orlando and St. Petersburg as part of the lead-up to the Florida Blue Florida Classic this weekend.

The recruitment swing attracted 252 students at St. Petersburg College-Gibbs campus on Wednesday, around 400 at Jefferson High School in Tampa on Thursday and more than 1,350 students at the Hyatt Grand Cypress in Orlando Friday.

As part of the event, students were entertained by the FAMU Connection troupe and later met with representatives from the University’s 14 schools and colleges to learn about academic and scholarship programs.

Speaking Friday morning, Robinson reminded the high school seniors about the competitive nature of getting into FAMU. The average GPA for the fall 2022 admitted class is more than 4.0 and the University has a limited number of seats for entering freshmen.

“You will be in good company,” Robinson said. “Don’t make FAMU your second choice. We had a record year for applications in 2020-2021. If you want a scholarship, you should have applied already. Don’t take FAMU for granted.”

While talking about his personal educational journey from attending a small Historically Black College and University (HBCU) LeMoyne-Owen College in Memphis to becoming a nuclear scientist at Oak Ridge National Laboratory, Robinson recalled having his ability as a Black student questioned at what was then Memphis State University. That’s not going to happen at FAMU, Robinson assured students.

Central Florida is fertile recruiting ground for the University. FAMU has signed 2+2 agreements with several schools in the area as part of its IGNITE Program to facilitate the transfer to FAMU of students who have earned their associate degree. 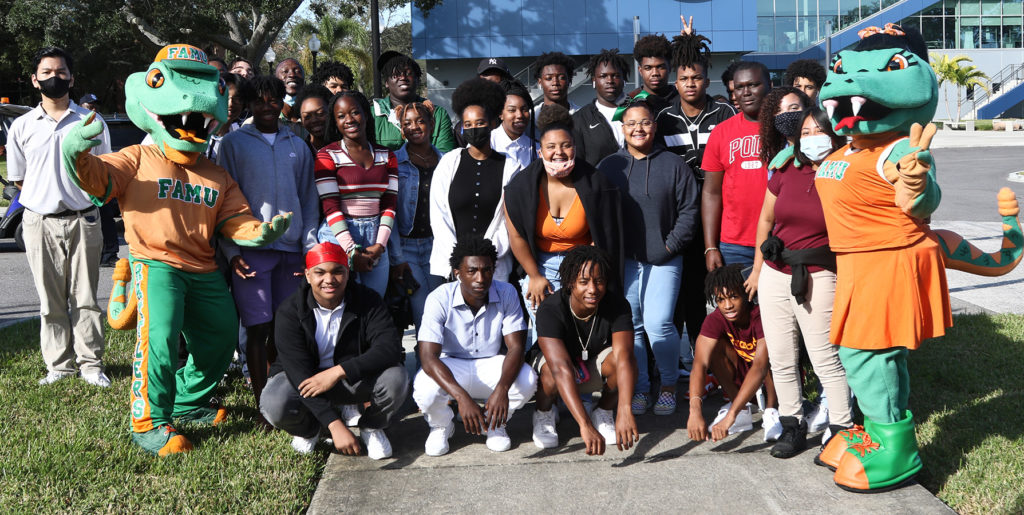 According to preliminary data from the FAMU Office of the Registrar, there are 425 Orlando students, 159 Tampa students and 69 St. Petersburg students enrolled at the University.

“The FAMU Presidential Recruitment event is always an exciting time for students, parents, and alumni,” said William Hudson, Jr., Ph.D., vice president for Student Affairs, whose division spearheads the tours. “Exposing students to all that FAMU offers is the priority through a focused presentation from President Robinson and the FAMU Connection. We invite all students to join the FAMUly and discover who they can become.”