Philadelphia – Four former Florida A&M track stars were honored in Philadelphia at the 126th running of the University of Pennsylvania Relay Carnival, affectionately known as the Penn Relays, for their exceptional performances from 1966-1968.

James Ashcroft, Major Hazelton, Nathaniel James, and Eugene Milton, donning their orange National Rattler “F’ blazers, were the guests of honor at the 2022 Penn Relay as they were enshrined into the elite class of athletes to earn a space on the Penn Relays Wall of Fame.

In 1968, the 440-relay team won the race for the third consecutive year.  The team won the race with the same four runners, which is why they were honored.  After a press conference, the team was escorted to midfield for the presentation to a rousing applause from the crowd.

These athletes all played football for the legendary Coach Jake Gaither while running track for Bobby Lang.

“Coach Lang was like a father to us.  He groomed us with tough love, but he and Mrs. Lang were the best,” Ashcroft said.

An advantage of the four playing football and track was the ability to practice baton handoffs after football practice.

“When we started having success in the 440 relays, it made us work harder because we wanted to be better,” James said.

The team lost just one race as a 440-relay team.  During their sophomore year, they had not established the proper order.

“We weren’t comfortable with our order, and it just didn’t feel right when we lost to Southern University.  That was the last time we lost for the next three years.  Once we got the order down, nobody could touch us,” Milton said.

The Rattlers were the first team to win the event three times in a row which was referred to as “Retiring the Patterson Cup.”  During the 1960s, Florida Governor Claude Kirk was known to have a good relationship with Florida A&M.  He was a frequent guest of Coach Gaither on the sidelines and attended other events on campus.  In 1968 when the team won their third consecutive 440-relay at the Penn Relays, they surprised the crowd in what is legendary for the event.  Gov. Kirk had sent cases of Florida oranges to the venue and instructed the team to throw them out to the crowd when they won.  Olympic sprinter Norm Tate reminded the team of that during the celebration.

“I was here, and I’ll never forget when y’all were throwing out those oranges.  I’ve never seen anything like that,” he said.

All four members of the relay team are members of the FAMU Sports Hall of Fame.  Milton would go on to have the most successful pro football career of the crew as a member of the Miami Dolphins.  Since leaving FAMU, the team has also been volunteer officials for the FAMU Relays for over three decades. 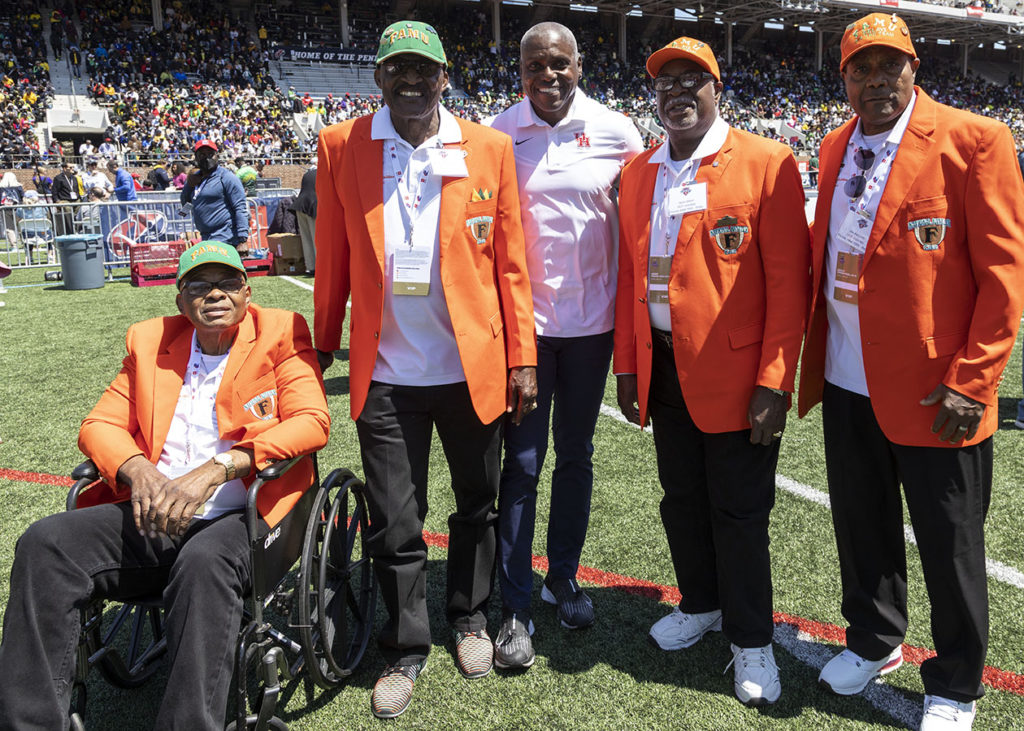 Once they were introduced to the crowd, U.S. Olympic great Carl Lewis, who is assistant coach at the University of Houston, went over and congratulated the quartet and thanked them for paving the way for runners like him.

“You guys knew how to work hard.  I get tired of trying to stress to these youngsters that they have to work hard,” Lewis said.