TALLAHASSEE (October 29, 2021) — Florida A&M University (FAMU) announced during its Homecoming celebration today that it received $1.5 million from the Knight Foundation to add multimedia functionality to the University’s new amphitheater. This new public space, which includes the Will Packer Performing Arts Amphitheater, will be known as the John S. and James L. Knight Foundation Plaza.

The investment demonstrates Knight’s continued commitment to FAMU and Historically Black Colleges and Universities (HBCUs) across the nation and highlights Knight’s work supporting the use of technology to reshape how people experience public spaces to support equitable and inclusive public spaces that bring people together.

Knight’s grant will enable students, the FAMU community and Tallahassee residents to experience visual and performing arts, news and other programming, both in-person and virtually, at the Will Packer Performing Arts Amphitheater on FAMU’s campus.

“FAMU is one of the nation’s most prominent HBCUs. We’re delighted to recognize and support their use of technology to promote student engagement,” said Knight Foundation President Alberto Ibargüen. “Creating an environment to better inform and engage communities is essential to strengthen democracy, which is at the core of Knight’s values. FAMU is playing a strong institutional role in helping to create a new generation of leaders and informed citizens.”

Knight’s commitment to integrate digital technology and equipment into the amphitheater will fulfill a top priority for FAMU students and administrators. FAMU President Larry Robinson, Ph.D., sees this investment as a significant opportunity to advance the university’s tech-forward vision while also driving one of the university’s key strategic priorities, which include exceptional student experience, transformational alumni and community engagement.

“The Amphitheater began as a student idea for a space to explore the possibilities that exist on campus to advance the storied history of entrepreneurship and cultural activity that the “Set” has provided for our students and the Tallahassee community for generations. Thanks to the generosity of the Knight Foundation, our students’ vision will be realized. This gift also allows us to give proper tribute to the residence halls that once stood on the sites as a home away from home for female students for decades,” Robinson said. “FAMU now has another venue to celebrate the wealth of creative talent and ingenuity of our students.”

Knight has long invested in public spaces to make them more accessible and welcoming for all residents. Knight’s latest FAMU investment aims to foster an informed and engaged community by using digital technology to attach people to place and to each other. 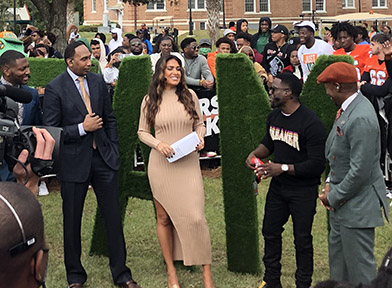 First Take’s Stephen A. Smith and Molly Qerim Rose with Kevin Hart and Will Packer at FAMU

“As a FAMU alumna, I am inspired by the students’ vision to ensure future generations of Rattlers, Tallahassee residents and visitors have a safe public square to connect with each other and plug into current performing and visual arts and news,” said Roshell R. Rinkins, Knight’s senior director of Grants and Administration. “I am proud of Knight’s continued investments in public spaces to amplify civic engagement and attach people to their community.”

The 25,000-square-foot Knight Foundation Plaza is located next to FAMU’s Student Center and “The Set,” a three-block stretch on South Martin Luther King Jr. Boulevard that has become a destination for convening students and alumni on campus.

“The new space not only is a new beautiful green space on our campus for students to enjoy, but it also represents the seeds that are sown and products that are created, directly from our institution,” said FAMU SGA President Carrington Whigham. “It inspires us to know that we are very capable to be successful in life, because the amphitheater is dedicated from an amazing alum that walked the same campus we do.”

Knight’s latest investment follows other commitments the Foundation has made to FAMU, including a grant to establish a Knight Chair in Student Achievement in the journalism program. Knight Chairs are top professionals who bridge the newsroom-classroom divide with innovative teaching, major outreach projects and their own journalism. Since the program began in 1990, Knight has endowed 26 chairs and professors at 23 universities. The chairs have helped lead journalism and media education — and journalism itself — toward a better future in the digital age.