FAMU Students Move Into Residence Halls Ahead of Fall Semester

Following a tradition he adopted during his tenure, President Larry Robinson, Ph.D., greeted the students and their parents as they brought their televisions and furniture into the four-story building.

“We’re excited about welcoming our students to start the new school year,” said Robinson, who projects a slight enrollment increase to around 10,000 students this fall. The University has plans to meet the increasing demand for on-campus housing. “We are working to enhance our infrastructure. Our master plan calls for us to get up to 4,000 campus beds. We have long range plans to build more facilities like the FAMU Towers.”

The start of the fall semester occurred against a backdrop of a higher demand for on campus living. To accommodate more first-time-in-college students in residence halls, the University offered upper classmen who were assigned on campus housing a rental and food subsidy to move off campus. More than 227 upper classmen took the offer, freeing up space for freshmen, those under 18, students with disabilities and transfer students to move on campus, according to Jennifer Wilder, Ed.D., director of University Housing.

“We welcome our students back to the “Hill.” Move-In has been relatively smooth and we expect the trend to continue,” she said. “We encourage students and parents to be mindful of the heat and humidity, and stay hydrated during the move-in process. We are looking forward to a great year.”

Among those first-year students moving in Monday was Nia Turner, who travelled from Valley Cottage, New York, with her mom, Linda, and older sister, Bria. 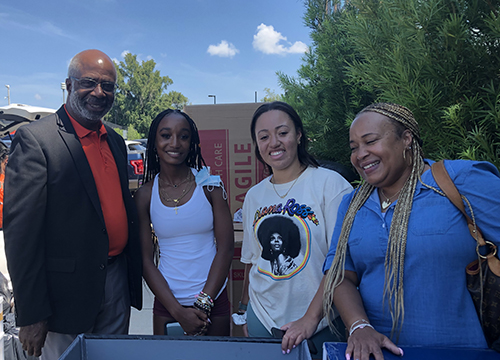 “I am excited for Nia. This was her first choice. She did early decision. I am excited because she is excited,” said her mother Linda Turner, who explained that she and her husband overcame concerns about their daughter being so far from home.

“Nia wants to be here. She has a strong desire to be here,” Turner said. “We think she will flourish.”

Nia Turner is among an increasing number of students who applied to FAMU. President Robinson said the admitted students had a stronger academic profile and an average 3.91 GPA. That trend is in line with FAMU’s student success goals, Robinson said.

“Our focus is making sure that every first-time-in-college student who enters FAMU can finish in four years,” said Robinson, who spoke about stepped up recruitment efforts, such as the upcoming fair at Miami Dade College as part of the Orange Blossom Classic activities in early September. The drive toward student success must start before junior or senior year of high school, he said.

“We want them to be preparing for us much earlier,” Robinson said. “We have to grow our own outstanding young men and women who are ready to start college on their first day.”

Recruitment made a big difference to attracting Gabrielle Leahr, a food science student, who drove from Loganville, Georgia, with her parents, Daniel and Janet Leahr.

Leahr said his daughter’s choice of FAMU was due largely to the recruitment efforts of FAMU alumnus Stanley Burney, Community School director for Gwinnett County Schools.

“He did the University a big solid. He’s an asset to the school,” said Daniel Leahr, who added that Robert Carroll, director of the campus recreation, helped seal the deal when he gave the family a first-class tour during their campus visit.

On Monday, the Leahrs stood alongside scores of other parents and students ready to begin their FAMU journey.

“I’m excited.  She has been giddy as the days approach,” Daniel Leahr said. “She’s has gone from three to 10 to 15. She is exploding and ready to go. She’s ready to be a freshman.”