Retired Deans Cynthia Hughes-Harris and Rodner Wright served as Provost and interim Provost, respectively, during their tenure with FAMU. 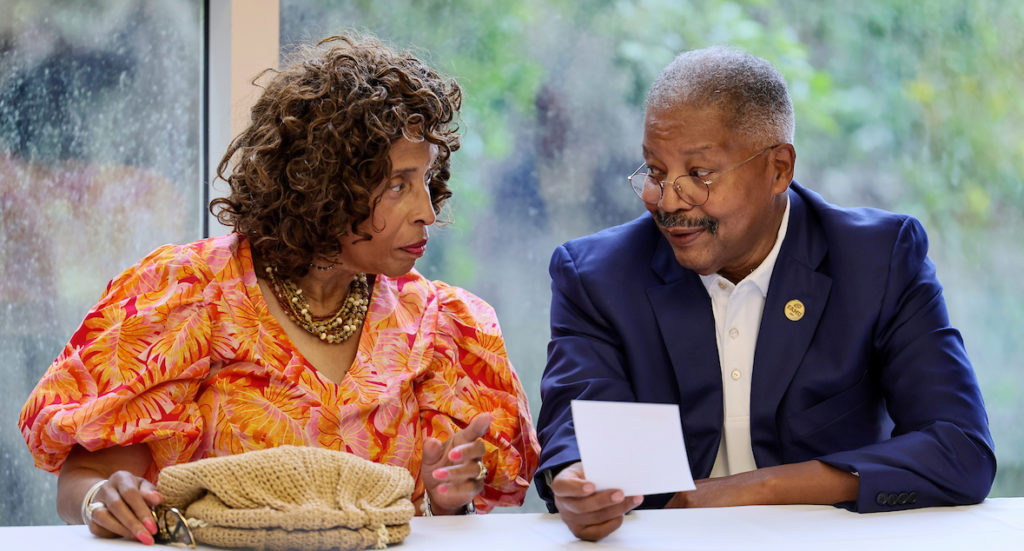 Cynthia Hughes Harris and Rodner Wright enjoy a roasting as they retire from Florida A&M on June 9, 2022.

Harris served as the Dean of SOAHS since she returned to the position after having served as FAMU Provost and Vice President for Academic Affairs from 2008 to 2012.

“Dean Hughes-Harris has been a dynamic and visionary leader for the School of Allied Health Sciences,” said Maurice Edington, Ph.D., provost and vice president for Academic Affairs.

Before assuming the position of dean at FAMU, Harris was the chair of the Department of Occupational Therapy at Columbia University in New York. She is a graduate of the University of Illinois at both the graduate and undergraduate levels. Her undergraduate degree is in occupational therapy, in which she remains an active contributor to the field. 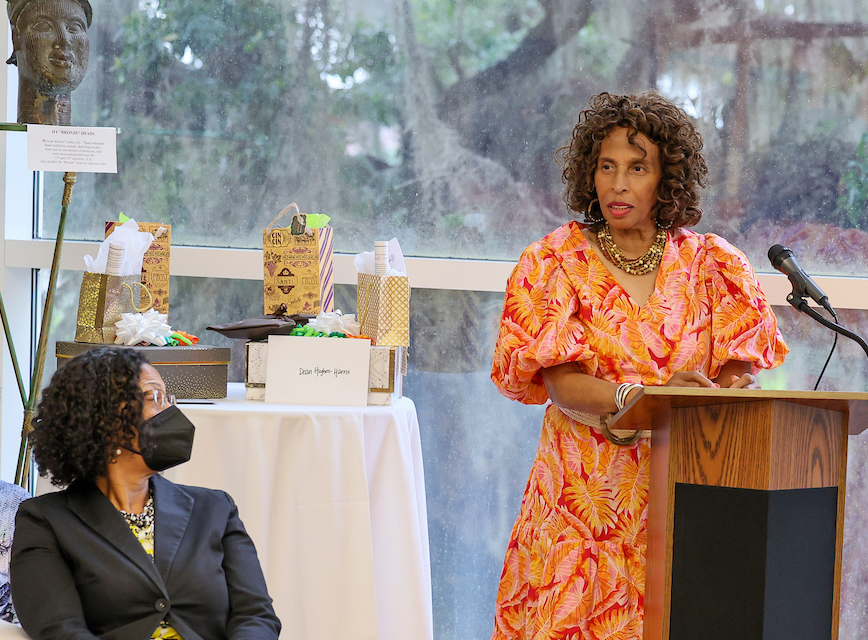 Her master’s and doctoral degrees focused on higher education and policy studies. As a researcher, one of her primary investigative initiatives addressed the results of the qualitative experiences of minority students in different academic environments.

In this context, Harris has studied the lives of college students to identify and alleviate stressors that interfere with maximum academic performance and achievement. Another of Harris’ research activities focused on HIV prevention programs for high-risk urban adolescents. Harris has successfully implemented related programs in Chicago public schools as well as schools in the South Bronx section of New York City. At FAMU, she has been particularly successful in receiving external funding for purposes related to the improvement of health professions education and the improvement of societal health.

She has presented her health disparities research initiatives in multiple forums across the country including the National Meeting of the Black Caucus of State Legislators and the Hispanic Caucus of State Legislators. She served as a presidential appointee to the Advisory Committee of the White House Conference on Aging. Harris has served as a director on several Boards including the National Society of Allied Health, the Association of Schools of Allied Health Professions, and the Big Bend Area Health Education Consortium.

She was honored by the University of Illinois as a distinguished alumnus and recipient of the Ruth French Lectureship. Recently, Harris was presented with the Cultural Pluralism Award by the Association of Schools to Advance Health Professions. She was also a featured speaker to the Tallahassee Chan Center on the topic of “Racism in Health Care.”

She has also been an active contributor to initiatives focused on communications to the community related to the COVID crisis. Her current activities and long-standing goals are focused on contributing to the emergence of FAMU as a national resource for health disparities elimination in underserved populations.

“I’m a native of Chicago although I came to FAMU from Columbia University in New York City. I am looking forward to establishing a new life in South Florida, including being close to my family in Palm Beach Gardens, especially my 11-year-old grandson,” Harris said. “I  am also looking forward to taking advantage of possible consulting opportunities within health care and academic arenas in the state.”

Mary Simmons, Ph.D., who served as the director for the Division of Cardiopulmonary Science in the School of Allied Health Sciences, has been named interim dean. A national search for the next dean will begin immediately.

A native of Pittsburgh, Pennsylvania, Wright has served as dean of the School of Architecture and Engineering Technology since July 1996.  As senior dean, he was selected to serve as interim provost and vice president for Academic Affairs from August 2012 to February 2015 and again from September 2016 to October 2018.

During his tenure, he completed successful dean searches for the School of the Environment, the College of Science & Technology, the College of Social Sciences, Arts & Humanities, School of the Environment, School of Journalism and Graphic Communications and the University Libraries. Wright is a tenured, full professor in the School of Architectureand Engineering Technology and has chaired and served on numerous campus-wide committees at all levels. 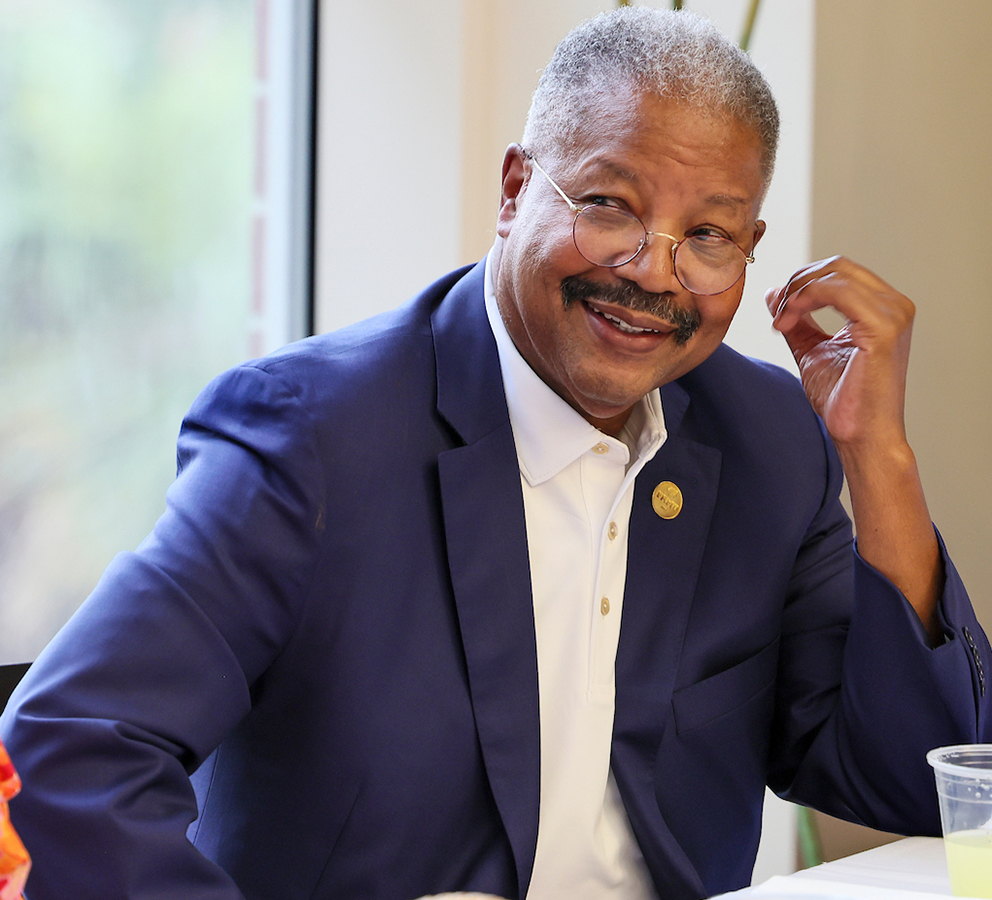 “I will cherish the memories of those I have enjoyed working with, the friendships formed, and the many memorable events I have participated in and witnessed,” Wright said. “I am forever grateful for the opportunity to serve the University as dean and twice as interim provost and vice president for Academic Affairs during my 26-year tenure at Florida A&M University. My experiences here have not only stimulated me intellectually but has also served as inspiration for me personally and professionally.”

Wright also served as the Step One grievance officer for faculty grievances filed by faculty campus-wide, and as chair of the OrganizationalAnalysis Taskforce consisting of more than 30 faculty and administrators from across the campus, which contributed significantly to the University’s academic restructuring plan implemented in July 2011.

Since 1995, he has served on and/or chaired more than 16 accrediting and candidacy visits combined, including a candidacy visit to American University of Sharjah in the United Arab Emirates in 2008.

Associate Dean Andrew Chin, who served as interim SA+ET dean when Wright was appointed interim provost, will serve in that role until a permanent successor is selected.