Under an ominous skies, campers formed a marching line that stretched from the intersection of Wahnish Way and Robert and Trudie Perkins Way south to the parking garage. Separated into orange and green bands, the campers, including 105 drummers, 45 drum majors, 70 trombones and 85 trumpets, lit up the air as they marched up east of Perkins Way turned south on Martin Luther King Boulevard, past Lee Hall and culminated at The Set, where President Larry Robinson, Ph.D., FAMU Marching “100” announcer Joe Bullard, former Direcor of Bands Julian White and scores of parents and other spectators cheered them on. 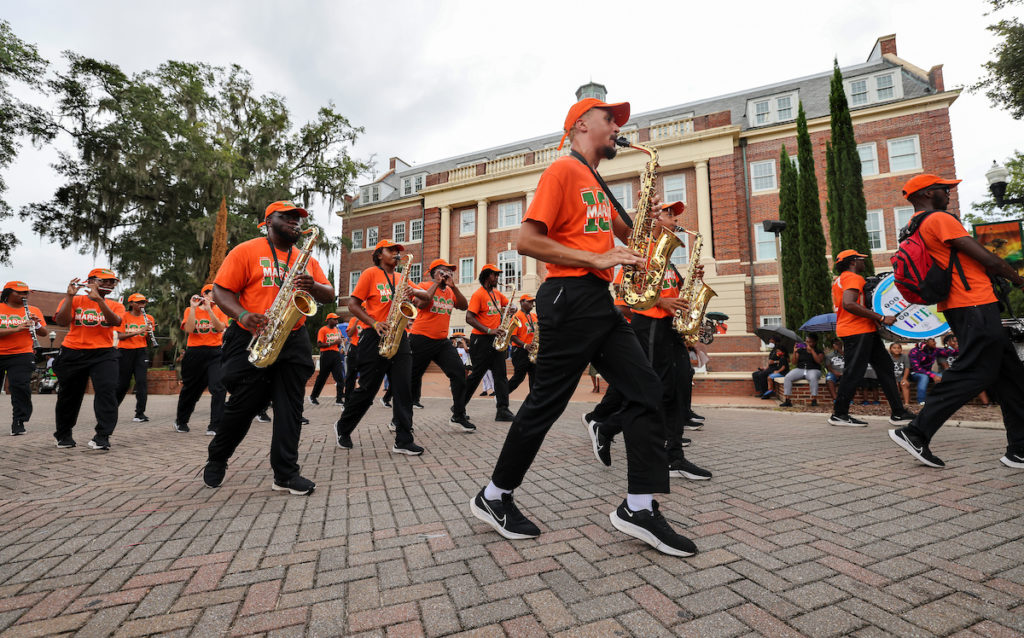 “It’s exciting to have over 600 kids at summer band camp. It’s a record for us. Look at the crowd waiting for the parade to start,” said Robinson, who was surrounded by parents on the stage near The Set. “We’re looking forward to these kids going on and doing great things. Some of them will be staying, and some of them will coming back. We really are looking forward to that. Thanks to Dr. Chipman’s team for doing a fantastic job with these young people as they do every year.”

This year, Band Camp attracted middle and high school students from California, Maryland, Michigan, Wyoming, the Bahamas, Germany and across Florida for a week of music drills, rehearsals, musicianship, and performance, said Director of Bands Shelby Chipman, Ph.D. In addition to the camaraderie of working with fellow student musicians from across the country, participants learned lessons about leadership and discipline they can take back to their schools.

“We’re just excited about the future of music and band programs all around because we know these students are going to be inspired when they leave after working with our camp counselors who’ve done yeoman’s work all week long,” Chipman said.

Orlando’s Jones High School students Paras Robinson and Antonio McGee both performed in the drum major section. Both have found Band Camp to be very educational.

“Since we are first year drum majors, these leadership skills will help us in our band program,” McGee said. “It has been a very good experience. I will definitely come back next year.”

Robinson said this week may influence where she attends college.

“The week of camp has been great. People are amazing. I love learning new things,” said Robinson, who plays alto saxophone and hopes to participate in band when she attends college. “FAMU has been on my top list, but since I got here, it got boosted up. I’d like to go here.”

Summer Band Camp comes less than a month after the FAMU Marching “100” Band made international headlines for its performance at the Louis Vuitton Paris Men’s Fashion Show. Some band members and staff who traveled to France are among the camp counselors this week.

Summer Band Camp is a phenomenal recruitment opportunity for the University, said

“It’s a great recruitment event for the band because it brings them into our facilities and to the University. It lets them know what we do, how we do it,” Lovely said. “They get to see this campus. A lot of times the students don’t get a chance to actually see and enjoy the college experience.”