Led by Drum Majors Jalen Roberts and Jarvis Rittman, the 35-member contingent of the band opened with “Mighty Rattler” followed by “Rattler to the Bone,” then “Get Up.” They were then followed by male models, who walked the runway to the lyrics of Kendrick Lamar, who performed alongside the runway. After the last model left the runway, the band returned to perform their standard “SOS.”

Director of Bands Shelby Chipman, Ph.D., and some members of the Band staff had front row seats in the stands just several feet away from the runway.

“I was super excited, super relieved and just so proud of the students and the level of their performance knowing all the changes we had to make from the initial concept of the show and what the expectations were going to be,” said Chipman, whose final performance as a band member was the 1989 Bastille Day Parade. The Louis Vuitton fashion show provided a different kind of venue to showcase the band’s repertoire, he said.

“We brought Tallahassee; we brought Florida A&M; we brought the Incomparable Marching ‘100’ to Paris by performing all the highlights we perform at Bragg Memorial Stadium and traveling on the road. That made it special.”

The idea for a marching band performance in the men’s fashion show had been a long-held  vision of Louis Vuitton Creative Director Virgil Abloh, who died last November at age 41. After researching bands online, the show’s producers chose the Marching “100.” The invitation came at the end of May and was followed by three frenetic weeks of selecting 35 students and 10 staff for the all-expenses paid trip, arranging music and routines and securing passports.

Students and staff arrived in Paris in two groups on Sunday, June 19, following overnight flights from Tallahassee via Atlanta. Rehearsals began Sunday afternoon and continued daily, culminating with a Wednesday session at the Louvre at which Lamar participated.

Marvin Jean, a senior music education student, said being able to play in Paris was a dream.

“We put in so much work, and I am just happy to see it pay off. We left if all out there on the stage,” said Jean, a euphonium player from Broward County, Florida. “It was incredible. We saw celebs. The energy was high. It was an honor and a privilege to be in Paris and to play music for people you see on TV all the time.” 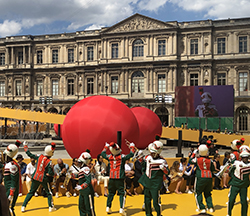 Louis Vuitton held its Spring-Summer 2023 Men’s Fashion Show outdoors in the Cour Carrée, one of the main courtyards of Louvre museum. Soccer, fashion, and entertainment stars mingled on the runway before the event began. After the performance, fashion and sneaker designer and founder of the Fear of God luxury streetwear label, Jerry Lorenzo, a FAMU alumnus, met briefly with the band members.

Crowds of spectators stood on the sidewalk cheering as band members left the venue for their bus. Soon afterward, the Marching “100” then drove to the Eiffel Tower, where they entertained an appreciative crowd of tourists from Mexico, the U.S. and across Europe.