The university presidents spoke of the challenge of their aging campus infrastructure and the need to construct new on-campus housing to accommodate the surge in freshman applications.

Robinson thanked legistators for their support of the FAMU’s 2022 legislative priorities in support of its student success initiatives. But the University needs continued funding to upgrade and maintain existing buildings.

“We received $26 million this year, but our need is eight times as high,” Robinson said. “Deferred maintenance continues to be a major issue for us at Florida A&M University.” 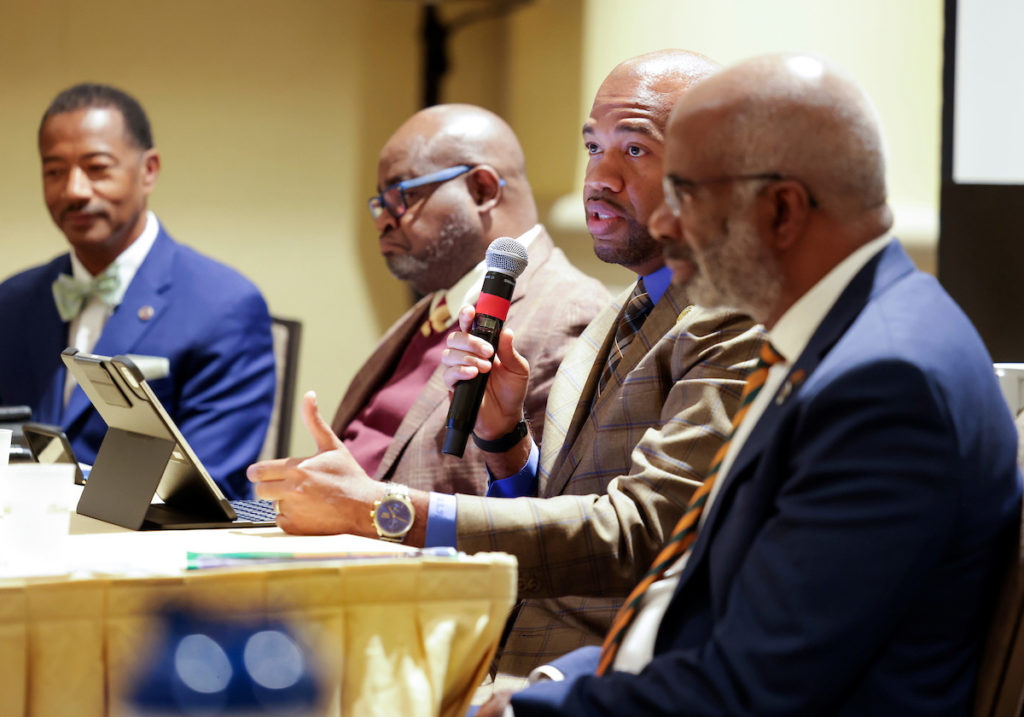 (from left) Four Florida HBCU presidents, Jaffus Hardrick, A. Lawrence Drake, Zachary Faison and Larry Robinson, speak to members of the legislature about funding needs for the upcoming year and beyond during the 2022 Legislative Issues Summit. Friday Nov 18, 2022 in Orlando, Fla. (Glenn Beil)

BCU’s Drake spoke of the need for infrastructure improvements for his Daytona Beach campus that was hit by two hurricanes, both of which forced students and staff to evacuate.

“We want this institution to persist for another 118 years, and our infrastructure is critical. That’s not just the fortification of our existing buildings but also the new buildings that we need for some of the new programs,” Drake said.

EWU President Faison highlighted  his institution’s progress to add 16 new degree programs since the Jacksonville-based school transitioned from a college to a university. He also thanked legislators for their support increasing EWU’s recurring funding.

“My ask is for your continued advocacy and ensuring that the funding that you have provided to us stays at that level,” Faison told legislators. “I can assure you that we will continue to be good stewards over dollars that you have given us.”

Funding is needed not just for infrastructure for scholarship and salaries. FMU President Hardrick said more money is required if Florida’s four HBCUs will remain competitive in recruiting top students and professors.

“We are in a serious battle for talent, especially our faculty,” Hardrick said. “We can’t compete, especially with the money they are putting on the table.”

The annual conference convened to coincide with Florida Blue Florida Classic events in Orlando. The timing allows the state’s HBCU presidents to dicuss their legislative priorities with some of their staunchest supporters. The conference was held as legislators prepared to return to Tallahassee for organizational and committee meetings. The 2023 Legislative Session begins April 10.

FAMU has launched its inauguaral legislative internship program, which will place up to 10 interns at the State Capitol next year.