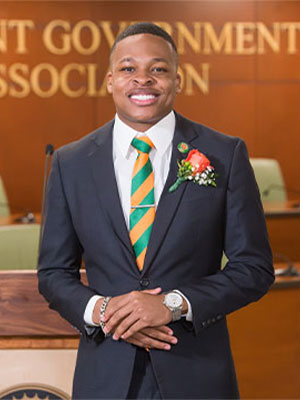 Zachary C. Bell is a business administration scholar from “The Ville that runs the Hill” Jacksonville, Fl. He is a third-generation Rattler continuing to build on the rich legacy his family has on the highest of seven hills. Zachary currently serves as Student Government Association President and University Trustee. He began his service in SGA his freshman year when he was elected to the 49th Student Senate. Since then, he has served in many leadership roles including Senate President. Zachary was awarded Sophomore Senator of the Year for the 2020-2021 academic year. Outside of student government, Zachary is heavily involved in his major and on campus. He has had the opportunity to intern with major companies such as Lockheed Martin Corporation and the Walt Disney Company. He is a proud Spring 2021 initiate of the Beta Nu chapter of Alpha Phi Alpha Fraternity, Inc. Zachary prides himself on being a servant leader and prioritizing the needs of the student body. He lives by Proverbs 3:5-6, “Trust in the LORD with all thine heart; And lean not unto thine own understanding. In all thy ways acknowledge him, And he shall direct thy paths.” 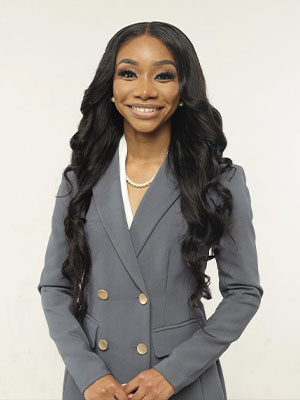 Makira Jalisa Burns is a fourth-year political science student minoring in pre-law from Orlando, Florida. She is a proud first-generation college student with ambitions of becoming a lawyer. Makira has served within the Florida A&M University Student Senate since her freshman year of college. She was named a Florida Gubernatorial Fellow for the 2021-2022 academic year. She also has experience working for the United States Department of State where she interns at the U.S. Embassy in London, England, the Florida Department of Transportation, and the Florida House of Representatives. She has a strong passion for public service and giving back to underserved communities. She is the Founder of Igniting Scholars, a non-profit organization dedicated to preparing students to excel in their collegiate careers and life after college. She lives by Philippians 4:13, "I can do all things through Christ who strengthens me." 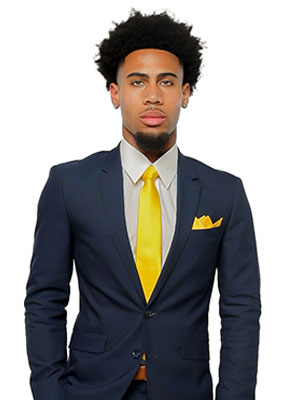 Kelton Williams is a fourth-year health science scholar from Pensacola, FL. He humbly serves the student body as the Senate President of the 52nd Student Senate for Florida Agricultural and Mechanical University. He is a second-generation rattler following in the footsteps of his mother, who graduated from Florida A&M’s College of Pharmacy. In the spring of 2021, Kelton transferred to Famu and hit the ground running. During his first semester, he was sworn into office as a senator in the 50th Student Senate. In the fall of 2021, Kelton was appointed to serve as chairman of the Elections and Appointments Committee for the 51st Student Senate. He was tasked with duties such as revising election codes, overseeing campus elections, and bringing voter awareness to the student body. Aside from his student government involvement, he is very involved on campus. Kelton is a member of the Minority Association of Premedical Students (MAPS) and Physicians in Training (PITS) where he further learns about the skills needed to reach his goal of becoming a physician and advocating for health equity in minority communities. He is also a brother of the Omega Xi Chapter of Alpha Kappa Psi Professional Business Fraternity, Inc. where he serves on the executive board as Chapter Parliamentarian as well as Chairman of the Bylaws committee and a general member of the innovations committee and communications committee. In the summer of 2022, Kelton will have the pleasure of serving as an Orientation Leader for incoming freshman and transfer students. He has also been crowned Mr. Transfer Student Association for the 2022-2023 academic school year and will serve within the organization to help facilitate smooth transitions for fellow transfer students as well as help recruit potential students to the illustrious university of Florida A&M. While he is heavily involved on campus, Kelton continues to thrive academically by securing multiple research and clinical internships as well as working towards his certified medical assistant license. He is excited to take on the role of Senate President and hopes to make a lasting impact on campus. 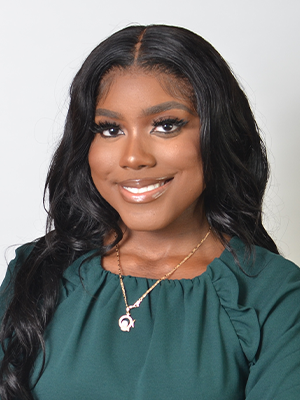 Londe Mondelus is a third-year political science student from West Palm Beach, Florida. Londe is grateful and excited to serve her fellow Rattlers. She currently serves as the Senate President Pro-Tempore for Florida A&M University Student Government Association 52nd Student Senate. Londe begin her service in SGA as a freshman senator in the 51st Student Senate. She has written and sponsored six pieces of legislation. She was a past intern with Greenberg Traurig Law Firm and Verizon's in-house attorneys as a part of their Verizon/Greenberg Traurig HBCU Pre-Law Internship Program. Londe's current interests are Law, Voter Advocacy, and Public Policy. Londe has experience working with voter registration organizations and the Florida House of Representatives. She has also enjoyed being an attendee and presenter for the 2021 UMD Rising Scholars Conference. She actively seeks opportunities to develop problem-solving, analytical, and leadership insight. She also serves the University as an Orange & Green Tour Guide where she actively recruits prospective students by showcasing our illustrious University. She is a member of the Beta Alpha Chapter of Alpha Kappa Alpha Sorority, Incorporated and is also a member of J. W. Hatchett Prelaw Honor Society. While she is committed to forward progress even in her early stages of leadership, it is her hope to make a long-lasting impact on her community. She is delighted to connect with you. 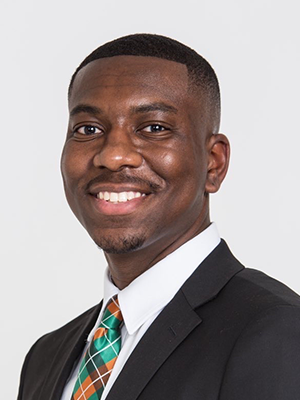 Devan M. Vilfrard is a student of service from Fort Lauderdale, Florida, who looks to make positive changes that will impact today's generation and the generations yet to come. He will earn a Bachelor's Degree in Political Science with a concentration in Pre-Law upon his graduation in April 2023. Devan serves as Chief Justice of the Florida A&M University Student Government Association. He previously served as Associate Chief Justice during the 2021 - 2022 academic year where he earned the annual Most Valuable Justice Award. He also served as an Associate Justice during the 2020 - 2021 academic year, where he earned the annual Judicial Branch Newcomer of the Year Award. Devan is the immediate Past President of the NAACP Florida State Conference of Branches Youth & College Division and served two tenures as Chapter President of the Florida A&M University Chapter of the NAACP. During his time in the NAACP, Devan earned the Medgar Wiley Evers Leadership Award from the National Youth & College Division at the 2022 NAACP National Convention and an honorary Silver Life Membership from the National Youth & College Staff for his work in activism and organizing. Devan is a veteran of the United States Army, where he served six years under the Florida Army National Guard. While in service, Devan has engaged in many active duty humanitarian missions, including post-hurricane recovery, search and rescue, and COVID-19 aid & logistics. Devan gained a wealth of experience from internships that included Ben Crump Law, the Akbar Law Firm, Pittman Law Group, and three consecutive legislative internships within the Florida Legislature. Devan is an inaugural fellow of The Memorial Foundation's Social Justice Fellows Program, which develops young adult leaders to make change through the leadership values and spirit of Rev. Dr. Martin Luther King Jr. Devan is also a member of the inaugural class of AT&T's Dream In Black HBCU Rising Future Makers which highlights HBCU students innovating, influencing, driving culture, and creating change. Along with fellow peers his age, he is working with the Emmett Till family and the Emmett Till Legacy Foundation to bring awareness and justice to the murder of Emmett Till. Devan's ultimate academic goals are to attend Howard University to earn a Master's Degree in African History and a Juris Doctorate from Yale School of Law. Overall, Devan aspires to serve the citizens of Florida as a criminal defense attorney and politician to help his fellow Floridians in low-income and minority communities fight for their freedoms and advocate for themselves through legislative action. 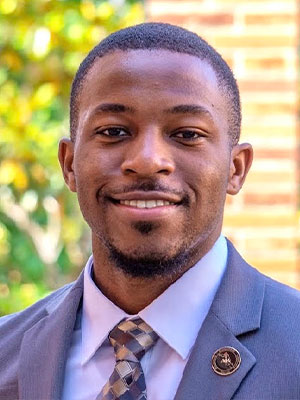 Braxton McMillon is a fourth year business administration student hailing from Ft. Lauderdale, FL and he is upholding the FAMU legacy as a second-generation Rattler behind his mother. Braxton currently serves as the Associate Chief Justice in the Student Government Association's Student Supreme Court. Prior to this role, he began his service as an Associate Justice for the 2021-2022 academic year. Braxton has diligently served the university at many other capacities outside of Student Government. He is a proud Spring 21 initiate of the Beta Nu Chapter of Alpha Phi Alpha Fraternity, Inc where he served as Secretary. He also served as Vice President of the FAMU NPHC, Chaplain of the Collegiate 100, and a Presidential Ambassador, to name a few. While Braxton excels in the classroom and on the yard, he's also had vast professional experience throughout his collegiate career. He interned for Commonfund Asset Management Company in NYC as an Investments Analyst, Jacobs Engineering Group, Inc. as a Project Management Analyst, FAMU-FSU COE as a Research Analyst, and ultimately fulfilled his passion for languages as a Spanish Tutor here at FAMU's Tutoring Center. Braxton has exceptionally,represented FAMU well and will continue to always exude "excellence with caring."